Laurie’s still our fastest over-70 sprinter

After the disappointment of injury at the Whanganui Masters in midFebruary Laurie Malcolmson trained carefully and went to the New Zealand Masters Championships on February 27-28 in Taranaki at Inglewood. Selecting four events he competed in the 70-75 age group and won gold in three — the 60 and 100-metre sprints and the javelin with a silver in the weight throw. He was pleased with the results, saying his 60-metre time of 8.8 seconds into a headwind was 0.1 second slower than his time which made him the world’s fastest in his age group in 2020. He is now back in training, running the Riversdale Rd stretch which he said is tough. He aims to be back competing in hurdles next season. In the meantime he is looking forward to a reunion with the other members of the Muriwai Quartet, a group of four athletes who trained on the beach together preparing for the 1974 Commonwealth Games. Two made selection but Laurie missed out due to injury. They are meeting in July — Laurie is the only one still running. Not surprisingly he has been a finalist for the past three Tararua Sports Awards. 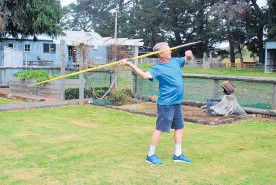