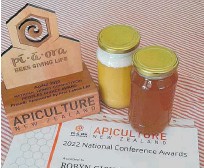 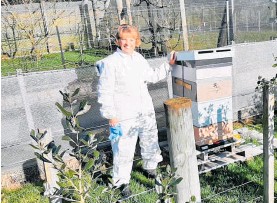 One small jar of CHB Honey survived a flight to Christchurch, getting stuck at the airport for days, missing its date with a line-up of judges and only making the finish line of one competition — to win the People’s Choice Award at the Apiculture New Zealand National Honey Competition. The National Honey Competition is part of the industry’s annual conference and this is the first time honey tasting has been opened up to conference attendees and a People’s Choice award given. Judges said the section boasted an “interesting range of flavours” including thyme, pumpkin and lavenderinfused honeys. Central Hawke’s Bay beekeeper Robyn Gichard’s liquid honey proved to be the favourite in this category. Robyn sent six jars of her blended honey to the event. “I sent them on Monday and on Thursday they were still sitting at Christchurch Airport and missed four of the six categories I had entered. Of the other two, one jar had developed air bubbles from the flight so it was out of contention. “The last jar was put into a black container and subject to a blind tasting by conference delegates who then votes . . . and I won, and apparently by a big margin. “I was amazed. But it really is nice tasting honey.” Robyn, a member of the Hawke’s Bay Beekeepers Club, has won accolades at Hawke’s Bay level but this was her first foray into the national competition. She only has five hives but their placement is well considered and each develops its own flavour, which she then blends to get the taste she’s looking for. The name — CHB Honey — is because the hives are placed to the west and east of Waipukurau and one in Waipawa, picking up the flavour of the district’s two main towns. Two of the hives pick up a strong element of clover and one gathers nectar from surrounding gardens, but it’s the hives on Robyn and husband Graeme’s lifestyle block that add the “secret ingredients”. When moving from farm life to their five-acre block outside Waipukurau Robyn wanted fruit trees, but had decided they had to be under cover. She wasn’t going to do battle with birds, wind and frosts and after a career as a nurse she prefers to keep her produce additive free. The resulting orderly and well planned, fully netted orchard is planted with fruit and nut trees and berries — interspersed with the bee favourite, borage — that come on from November to May. “I don’t grow large quantities of fruits but I grow a big range. I don’t preserve any, we use it fresh and shared with family and friends. Our grandchildren enjoy the berries.” The trees and plants needed bees for pollination and the nectar from these fruit trees, berries and borage are the secret ingredients in Robyn’s winning blend of honey. “The clover has a subtle flavour and there’s a hint of caramel. One of the hives’ honey is a lot sweeter than the others so I just use a small amount of that in the blend, then there’s that berry taste that just tops it off . . . I’m still very new to the whole process but I do know what I like.” Robyn only started beekeeping five years ago and says there is a lot to learn when taking it up. She is grateful for the help and advice ashe’s been given, from the beekeeper who showed her how to extract honey from frames to mentor Val Nicholson. She also gains a lot of support from the Hawke’s Bay Beekeepers Club, which is close to starting a CHB group to cater for the growing numbers of local beekeepers. “Beekeeping is time consuming, can be heartbreaking and definitely isn’t a money making prospect. I still find it absolutely fascinating though, and can watch my bees for hours.” Through the HB Beekeepers Club, members use an MPI certified extraction plant, which means Robyn is able to sell her excess honey to help cover her costs. She’s happy to take preorders for the next batch, via robs. honeychb@gmail.com “I’m just a fledgling beekeeper, still learning, and I’m not planning on expanding.” But she is hoping to enter the annual competition again next year. “Of course it depends on the bees. It’s all up to them in the end.”