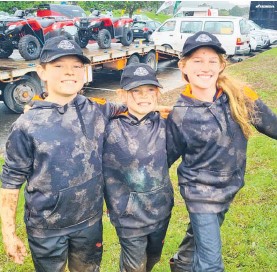 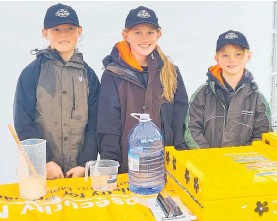 At the end of last term Sherwood School AgriKids team, The Farm Girls, represented the school at the national finals of the AgriKids competition in Whangarei. Hannah Tyler and Zita and Eva Pedersen and their families travelled to Whangarei for the event, part of the FMG Young Farmer of the Year Compeition, where 21 Agrikids teams from all over New Zealand were competing for the top prize. Although the team was not placed, Hannah Tyler was named top AgriKids competitor for 2022. Sherwood School principal Christine Morrison says: “We are very proud of Hannah, and, in fact, of all the girls.” The contest for primary schoolaged children is based on challenges from the food and fibre sector. At the grand final, the three-person teams were tested on their knowledge of simple, everyday ways to reduce the human impact on the environment, growing avocados and making guacamole, apiculture and wintering hives, native plants and where specific cuts of meat from. Their practical skills were put to the test by making a smoothie without any electricity, where they had to use a bike to generate enough power to work the blender and inspect, disassemble and reassemble a Honda CRF 125F air cleaner on the two-wheeler motorbike. They channeled their inner firefighter with Fire and Emergency New Zealand (FENZ) in a combat challenge, completing a scaled-down version of the FENZ obstacle course which included, climbing and descending a two-storey scaffold tower with a bandolier hose, hoisting hoses to the top of the tower, hitting a weight along a channel, zig-zagging down an obstacle course through fire extinguishers, hitting a target with a hose and pulling a weighted sledge 10 metres. A race-off had teams build a planter box with appropriate lining, place soil and plant seeds before they painted it and constructed an Irrigation NZ water system to irrigate it. They then moved on to the ratchet challenge, where they had to thread ratchets properly and secure a load on a truck. The Farm Girls team member Zita Pedersen says: “My favourite module was the fire fighting one. We had to climb up scaffolding with a folded-up fire hose over our shoulder. When we got to the top we got asked a question then we had to pull up a weight. “Next we had to walk down the scaffolding stairs backwards and when we got to the bottom then we got asked another question, then had to stand on a wooden platform and hit a metal weight with a hammer, it had to move about two metres. Finally, we had to run and get a fire hose, pull it down and then squirt a target.” Team member Eva Pedersen admits she was nervous in the beginning, but ended up really enjoying herself. “The last thing we did was the raceoff, which was not timed. First, we had to build a garden box then we had to fill it up with dirt and plant seeds in it. After that we had to tie down a quad bike with ratchet straps, then go back to the garden box and put the right fertiliser in and then, last of all, we had to take the motorbike. It was so much fun.”