Forest running event back on its feet 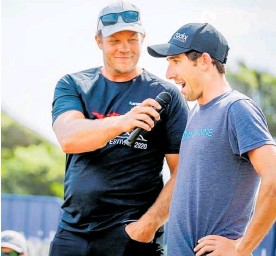 The Waitarere Forest Run is back up and running after the event looked dead and buried, but its resurrection comes without a 42km event. For that reason it will now be called the Waitarere Forest Run, as opposed to the Great Forest Marathon as it was previously known. The distances on offer would be 21.1km (half-marathon), 10km, 5km, and 2km runs. Event director Bengy Barsanti, from Barefoot Sport NZ, said organising was well under way. A website had been launched this week and an event date of April 16, 2023, was locked in. Staging a bona fide 42km run was not viable at this stage and Barsanti said for now they were focused solely on the resurrection of the forest running event. Barsanti said the aim was to continue the legacy of the event created and managed over many years by different marathon committee members, organisers and volunteers. The event was first staged 25 years ago by Levin Joggers and Walkers Club and quickly became a key fixture on the event calendar as the only off-road marathon in New Zealand at the time. People would travel from across New Zealand to compete, while often backpackers and overseas tourists would see it advertised and join in. But it almost became a victim of its own success. There were more than 2000 entrants in the 2021 event. It was arguably the biggest and most popular event on the Horowhenua sporting and social calendar. Levin Joggers and Walkers was a volunteer committee that had appealed for new members for a long period of time — to no avail — and were forced to disband. It had been a tough couple of years for the committee. The 2020 event had to be canned at the last minute despite a large amount of organising because of Covid-19. It had refunded all runners, but was left out of pocket. The committee also had to deal with the theft of a large branded gazebo, 18 trestle tables, a trolley dolly and 12 footstools that were stolen from race headquarters at Waiterere Beach in April last year. Barsanti had competed in the Waitarere event himself in the past and was saddened to learn the committee had disbanded and the event would be held no longer, and contacted them with the idea of taking over the event completely. He was sympathetic to the challenges organisers had faced and credited them for staging so many memorable events. “They had put love, sweat and tears into what was a great event for many years and that is one of the reasons we want to continue that legacy,” he said. “Due to the challenges of Covid-19 it is a very difficult time to be an event director.” Barefoot Sport NZ was responsible for staging a range of events over the wider Wellington region, including a Ka¯piti half marathon, trail-running events, the Xterra Series and the Wellington Triathlon series, as well as mountain bike events. The event website said the Waitarere Forest Run would operate under all traffic light levels in the Government Covid Protection framework, “in other words — we are on”, it said.