Domanic Grant is only 9 years old but has gone through more pain and heartache than most of us experience in a lifetime. The young boy from Shannon is currently in Starship hospital, fighting leukaemia for the second time in his life — after inching so close to remission, and has now also caught RSV (respiratory syncytial virus) and rhinovirus. His mum Cherie is by his side at Starship in Auckland, while his dad Phil is looking after the couple’s other five children at home. Domanic was diagnosed with Philadelphia positive lymphoblastic acute leukemia (pH+all) after an emergency trip on the air ambulance to Starship in November 2019. “At 80 per cent leukemia in his bone marrow, our fight began,” recalls his father. What ensued was a months-long battle that not even many adults are strong enough to fight but which Dom, as he is known among his siblings, handled like a trooper. His little body endured extensive chemotherapy, steroids, and all manner of treatments. His family fought an agonising battle, with tears, emotions, and more heart-stopping moments than they’d want to experience for a whole lifetime. Domanic’s dad Phil has a permanent head injury, and struggles with frequent migraines, which makes the task of looking after his other five children while his wife is in Starship with Dom all the more challenging. Through it all, Dom has fought, winning battle after battle, with the stoicity and strength you never expect an 8-year-old to have to display. It was all going as well as it could be and Dom was able to move back home to recover near his family, with regular scheduled visits to hospital for treatment. His body was responding to leukaemia treatment and he was close to being deemed in remission. Things were starting to look up, to the point that Dom was even able to return to school for a couple of days a week. For brief moments, life was almost normal. Almost. At the start of this month, Dom relapsed. “It was a shock for us all because he’d been doing so well. He was so close to being in remission.” The boy and his mum said their hurried goodbyes to the family and, once again, boarded a plane to Auckland, back to Starship, now their home away from home. The family has been apart since then, with Cherie looking after Dom while Phil cares for their five other children. Phil talks to Cherie and Dom every day on the phone, but hasn’t seen them since they had to rush to Starship again at the start of July. “It’s heart-wrenching sometimes,” he says. To make matters worse, Dom has also now contracted RSV and rhinovirus, and is on two courses of antibiotics. Dom had his birthday recently and his parents managed to get him a portable Xbox screen, with help from the Make A Wish Foundation. Dom was also spoilt with balloons, cake and gifts, with the help of Gabby’s Starlit HOPE, a community that provides random acts of kindness to oncology kids and their families. Back home in Shannon, dad Phil says he has been constantly amazed at the generosity of the community, including his children’s school. “Everyone has been just amazing,” he says. “They do school lunches for the kids to take the pressure off me, people drop off baking, bags full of fruit . . . It’s just overwhelming, it really restores your faith in humanity.” Can you help? Phil and Cherie have started a fundraising page to give Dom the best possible chance to fight this battle. There is no ultimate fundraising goal, other than anything that contributes to Dom’s health and happiness. “All funds will go to Dom journey wherever needed, travel, overseas treatment, goal is a open end, if any surplus left after kicking leukaemia, will be donated to other children fighting leukaemia, or start a charity in Dom’s name for children with leukaemia,” his dad wrote on the page. 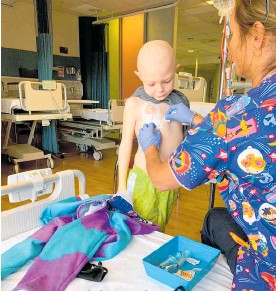