The next two participants announced for this year’s Harcourts Dancing for Hospice will not have to look far for advice. Not only will 18-year-olds Liam Rehu and Logan Nathan bring a youthful exuberance to the event, but they are also both following in their parents’ footsteps. Dancing for Hospice sees 20 Rotorua people with little or no dance experience paired up, given professional dance training, and asked to perform at an evening fundraiser. Liam is the third member of his family to hit the dance floor for Rotorua Community Hospice. His dad Warren did it in 2017 and his mum Sharon in 2018. He says he is feeling nervous but excited to support “a great cause”. “I was pretty nervous at first when they asked, but then I thought it would be good to keep up the family tradition. “It’s a good event for a good cause and will help build my confidence, so why not?” Liam has never performed on a stage before but drew confidence from seeing both his parents successfully take the stage previously. “I think I’ll pull through. I get the little nerves every now and then but I think I’ll get there on the day. My dance skills are not the greatest but that’s why we practise. “I definitely think if my parents can do it, I can do it. Hopefully, it will be fun, it should be.” Logan Nathan’s dad Oscar was also a dancer in 2017 and encouraged his son to get on board. Logan says the thought of dancing on stage is nerve-wracking. “I had to think about it for a while when they asked, it will definitely be out of my comfort zone,” he says. “I’m not sure whose comfort zone that would be in but certainly not mine.” Being able to support Rotorua Community Hospice, which needs to raise $1 million each year to operate and is aiming to raise more than $100,000 through this year’s event, was enough motivation for Logan to take the plunge and say yes. “It’s not often you get to support such a great cause and it’s cool to be able to do it in such an exciting way. “I talked to dad about it and he said, although it’s a really big thing to do, you are doing it for a really good cause. “He’s given me a little bit of advice, nothing major, just to try to get prepared as early as you can and not leave it until the last minute.” He says he watched his dad perform in 2017 and remembers feeling nervous about how he would go. “Me and my mate went and we were almost hiding under the table, wondering if it would go wrong,” he says. “It does give me a little bit of confidence and I was really happy for him that he did so well.” The remaining dance couples will be announced in early May and tickets will be on sale at the end of June. The event is on August 7 at the Rotorua Energy Events Centre. Follow Harcourts Dancing for Hospice on Facebook: www. facebook. com/harcourtsdancingfor Hospice or check out www. rotoruahospice.co.nz for all the latest updates. 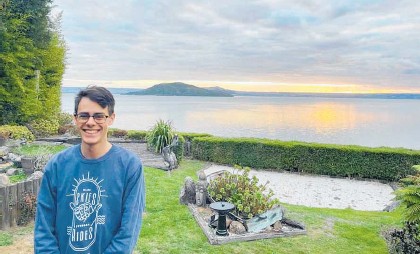