Skyactiv-x VS THE REAL WORLD

Mazda’s Skyactiv-x engine is an astonishingly complex engineering achievement that yields incremental real-world benefits. So it’s easy to be cynical. We’ve discussed Skyactiv-x in detail so many times that I fear my head will go into a 13B rotary-style spin if we do it again. If you want to see the detail, scan the QR code to watch the video. But basically, it’s a world-first engine fuelled by petrol that works like a diesel most of the time, meaning you theoretically get the best of both worlds. Hence the “X”: it’s a crossover of the two technologies. It’s tangible evidence of Mazda’s confident (some might say bloody-minded) assertion that the internal combustion engine still has much more to give in the face of the current car-industry obsession with electric vehicles. The real-world face of X is the Mazda3 hatchback you see here, which is one of the first production models to feature the new 2.0l engine (there’s also a X-powered CX-30 SUV). Mazda still offers Skyactiv-g versions of the 3: a 2.0l and a 2.5l. So to get the salient metrics out of the way, the X makes 132kw/ 224Nm compared with 114kw/ 200Nm (G 2.0l) and 139kw/252nm (G 2.5l). Overall fuel economy is 10 per cent better than the samecapacity G, or about 15 per cent better than the 2.5l version. So . . . is the Mazda3 X a more grunty alternative to the 2.0l G that maintains fuel efficiency, or is it a more thrifty alternative to the top 2.5l G that keeps most of the power? It’s neither of those strictly, yet a bit of both. The potentially negative spin is that there’s not a massive difference in the power and especially fuel economy figures between the new Mazda3 X and either of the G models. So what’s the point of the extra $3200 you have to fork out for the new engine? Well, it stands to reason that new technology costs. But Mazda partly gets around the issue by offering the X-engine only in the top Mazda3 Takami model, which also adds higher-quality leather upholstery, gloss-black alloys, a swish frameless rearvision mirror, heated steering wheel and 360-degree parking cameras. After driving Mazda3/cx-30 X and G back-to-back and then a longer test-period with the Mazda3 Takami, I’m convinced this technology makes for a more satisfying and efficient mainstream Mazda. The X-engine can operate either in Spark Controlled Compression Ignition (SCCI) mode, or standard spark ignition when required. Which is not that often. The theory of X is that you get the low-down torque and efficiency of a diesel with the same high-rev performance as a petrol. And so it proves in practice, although it still can’t match the ultimate power, torque and perkiness of the G 2.5l. The low-speed performance is helped by the fact that the X is a mild hybrid, the battery system doing its best to reduce load on the engine. There’s also a parttime supercharger on call to forcefeed air when required. The calibration of the 6-speed gearbox, which I’ve sometimes found wanting in the G-engined Mazdas, also seems much better resolved in the X. If there’s opportunity cost it might be in the mid-range, where the X-engine can sometimes seem to go off the boil a little. Whether that’s endemic to the X technology or just the hybrid system stepping back is hard to say. The Skyactiv-x option will no doubt appeal to tech-heads who appreciate what an incredible engineering achievement it is — and how significant it might become in future models. But there’s plenty to please buyers looking for more tangible talents as well. 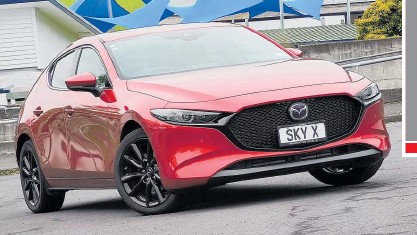