With joy, hope and spookiness merging, there is bound to be a range of emotions felt by those who head along to see the Rotorua Little Theatre’s upcoming production. The theatre will be showcasing Charles Dickens’ A Christmas Carol from December 8 to 18. Director Richard Rugg says A Christmas Carol is about a horrible, measly man by the name of Ebenezer Scrooge, who is an unfeeling human. It’s Christmas Eve and he is suddenly visited by one who has probably been his only friend in the world, Jacob Marley, who has been dead seven years. Jacob encourages Ebenezer to change his ways so he doesn’t end up the same way as him in the afterlife. Richard says the three ghosts of Christmas Past, Present and Yet to Come then take him on a journey to help him change his ways, and through that journey we learn why he decided to go through life not feeling anything and avoiding human contact. There are 15 in the cast for this show, and most of them are under 20, he says. “They are fantastic . . . We’ve had a very short rehearsal time period of five and half weeks. It puts the pressure on, which focuses the mind . . . We’ve been enjoying ourselves.” Richard says he decided to put together A Christmas Carol because he hadn’t seen it before as a show, so thought, “let’s do it and give it a try”. He thinks people will enjoy this show because it’s got a fantastic message of hope, which is what this festive season and time of year is about. “But also it’s a mix of a hopeful, joyous story with a bit of spooky as well.” 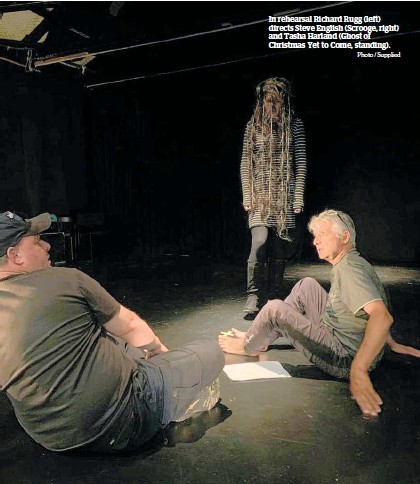