On a fresh spring morning I find myself at Te Puea Orchard, not far past Te Ngae Junction on the highway to Whakatane. It is an auspicious time for planting, Rakaunui on the Maramataka Maori. Answering the call, dozens of volunteers have turned out, providing willing hands to plant kumara. A van load of boys from Raukura, another van load of students from Western Heights High School, other helpers from the community and a raft of volunteers from Kai Rotorua. Their presence hardly stirs the cooing doves sitting on their perches on the sheds. They have seen it all before. But there is serious business to be transacted and tikanga to be observed. I join the group for the short walk up to the maara and wonder if perhaps I should have worn gumboots and not pink jandals. Too late now but the ground is not muddy and I won’t be in the garden. Japanese whanau have charge of the 3000 tipu and the boys help the Kai Rotorua koroua, Te Rangikaheke Kiripatea, move a rubbish bin full of water onto the trailer behind the small tractor. Once near the site the bin is emptied into a number of buckets and placed along the planting site. The Raukura boys teacher, Whaea Tiaho Fairhall, begins with a karakia. She tells the boys it is not from te ao tawhito but expresses the same sentiments that would have been voiced at a traditional planting. She gives a brief explanation of the Te Arawa korero that the kumara and other edible plants were brought from Hawaiiki by Whakaotirangi, in te kete rokiroki o Whakaotirangi. In my mind I see the pou in our tupuna whare Wahiao, of Whakaotirangi with her kete. I am in a happy space. (Tainui also claim Whakaotirangi and the tribes have engaged in friendly banter about the origins of the kumara for generations.) In rounding up her korero Whaea Tiaho imparts tikanga from her childhood: Please do not walk across the tipu. It is kai and you do not step over it. Te Rangikaheke shows the planters exactly how the tipu should go into the ground with a drink of water. His demonstration completed, Te Rangikaheke and I head back to the kitchen for a kapu ti and a talk. He tells me maara kumara have always been in his life. His Uenukukopako forebears had gardens on Mokoia Island and his father had three acres of maara at Pikirangi before the land became part of Rotorua Airport. For him, growing food reconnects us to Papatuanuku, the earth mother, and the kumara is part of the Maori DNA. Kai Rotorua, he says, began five years ago where in one week volunteers planted 68 backyard gardens in one week. He and nutritionist Jasmin Jackson founded Kai Rotorua in 2016, immediately after they finished the backyard garden project. “Every day we had 70 volunteers.” Through Kai Rotorua he has formed a number of relationships and is grateful for the support of bodies including the Rotorua District Council, Fonterra, and Bay of Plenty Regional Council. At Kai Rotorua’s 2021 AGM at Toi Ohomai just a couple of weeks ago he told stakeholders he was stepping down from his pivotal role but would stay as projects manager. “It’s time to back away, to let the young ones take over.” Those backyard gardens continue and just days before we meet Te Rangikaheke was in Murupara where there are 30 backyard maara. Te Puea Orchard is a major project where produce is sold at harvest time. The owners, Carl and Cheryl Dibley, want to retire but their children are not interested in continuing their legacy. The area is 4.5 hectares and Te Rangikaheke would ideally like Kai Rotorua to own it. One of his ideas to fund such a multi-million dollar purchase would be the development of an infant formula from kumara, a possibility which is already undergoing scientific research. Another of Te Rangikaheke’s projects is finding environmentally and eco-friendly storage for kumara, to prolong their shelf life. This week he is hosting a builder he went to see in Masterton who uses hemp-crete in housing construction. “I am looking at an above-ground rua and hemp-crete might be able to provide that. We’ll see.” Kumara need an environment where the temperature and humidity are controlled. Te Puea Orchard, named for the Tainui ariki Te Puea Herangi who met there with Apirana Ngata in the 1940s, has soil ideal for gardens, as a result of the Tarawera eruption in 1886 spewing pumice and natural minerals far and wide. It has an ideal micro climate. Te Rangikaheke said Carl Dibley is a whiz at profiling the soil and can tell anyone the history of the site just by digging down. The growers are also trialling hemp mat to see if they can find an eco-friendly alternative to black polythene as a weed suppressant. They are also looking for a rabbit deterrent after the vermin wiped out a newly planted maara. Te Rangikaheke sees a bright future and already has plans for 2022. To celebrate the first Matariki holiday on June 25 is a Taniwha and Dragon festival, bringing Maori and Japanese cuisine together. Korero has already started to bring together kumara growers at a hui in Rotorua. “I am keen to get the kumara vine going and have a korero then come out here. “There are 8000 cultivars of kumara. We have barely scratched the surface and that’s why I am so keen to spread the word.” 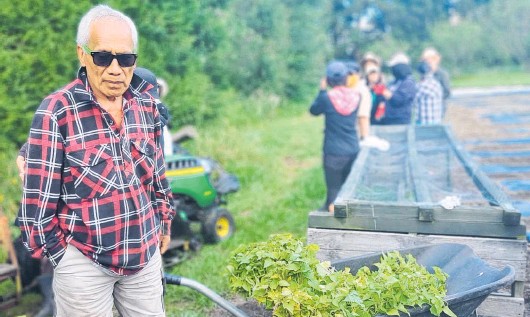