Toyota has a lot of boxes ticked with the new Highlander. It’s a sevenseater with family-plus passenger and cargo space, yet with the new hybrid powertrain it delivers that supersized package with the potential for sub-6.0-litre per 100km fuel economy. In flagship Limited ZR form, Highlander has to tick another box: luxury SUV. In max bells-andwhistles specification, it tops out at $74,990, which is significant money for a mainstream Toyota — although certainly still in the value ballpark compared with rivals like the Kia Sorento and Hyundai Santa Fe. There’s also a Limited model, so the Limited ZR is essentially the Highlander-with-everything-andthen-a-bit-more. It’s truly lavish with sparkly 20-inch alloys, quilted leather with heated/vented front seats, colour head-up display, panoramic glass sunroof and grunty audio system. It’s the only Highlander with a hands-free “kick” power tailgate, which seems a bit stingy on Toyota’s part; but yay for ZR buyers all the same. The hybrid powertrain helps with the luxury ambience, of course. Essentially a powered-up version of the RAV4 system (Highlander gets another 21kw), it’s really good at regen; so while the battery is only theoretically good for a few hundred metres of EV running, in reality it’s gathering up every bit of wasted energy and eschews petrol power for much urban running. It’s as quiet as a church and makes you feel just as pious. The 184kw engine isn’t quite up to the output of the 218kw 3.5-litre V6, but it’s still a strong performer and Toyota’s transmission keeps CVT “flaring” in check. The four-pot soundtrack isn’t exactly premium under load, but that’s opportunity cost for silent city driving. You can’t have the ZR with the V6 anyway; Toyota sees its top model as a hybrid and hybrid only. As with RAV4, the E-four allwheel drive is clever and something perfected on Lexus models a long time ago: the petrol engine drives the front, the electric motor the rear, which means it’s very quick to respond to changing traction demands. The Highlander is an SUV made in the US, for the US, so it favours comfort over speedy cornering. That’s perfectly in character and even though the chassis starts to float a bit when you’re pressing on, it remains well-controlled and predictable. The dashboard is a bit fussy, with Toyota’s signature asymmetrical infotainment screen and murky graphics, although you can bypass all of that with Apple Carplay or Android Auto phone projection; nice shelf for your phone, too, with a port to feed the cord though from the USB port lower down. It’s the little things, and you certainly can’t fault the build quality. Legroom in the rear is truly vast, although the seats could do with a bit more shape. The third row is knees-up occasional, but that’s standard for vehicles of this type. Even in seven-seat configuration you get a short but very tall load space (330l-plus). Fold them away flat and you have a five-seater with a cavernous 658l. Once upon a time, the neighbours would have dismissed your new Highlander as a rental car. Rentals aren’t a massive Toyota NZ thing any more (which is separate to rentals not being a big thing generally thanks to Covid-19); that, combined with this all-new model and the addition of hybrid technology, makes the new Highlander a highly desirable luxury SUV in a way that it has never been before. 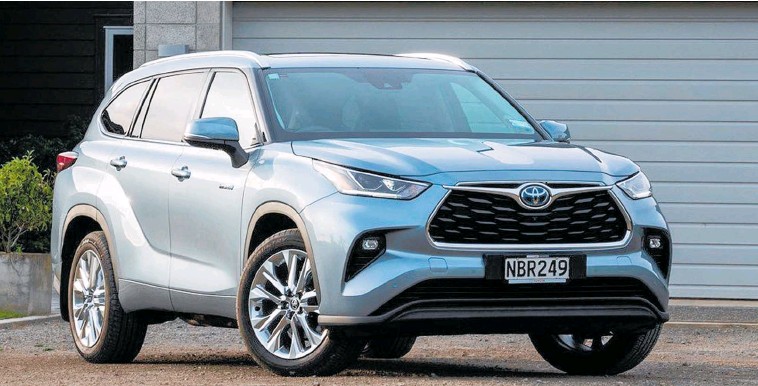 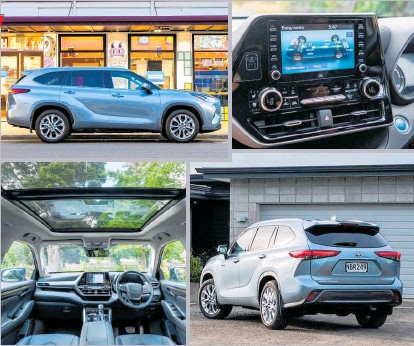