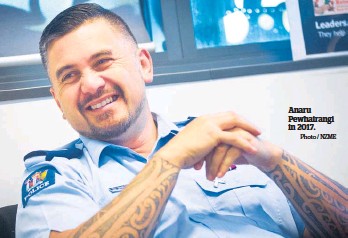 Aformer Rotorua police area commander will take up the role of community wellbeing deputy chief executive, after a vacancy of more than 114 days. In a statement on Wednesday morning, the council announced Anaru Pewhairangi had been appointed to the role, which has been vacant since September 20. The deputy chief executive role — one of seven at Rotorua Lakes Council — was created in March 2021 as part of what the chief executive Geoff Williams has called an “organisational realignment” which has so far cost ratepayers about $50,000. Anaru will leave his current Wellingtonbased police role and start at the council in February, the statement says. In the statement, acting chief executive Craig Tiriana says Anaru was selected from “strong” candidates. “This is a big role within our organisation, responsible for more than 100 staff as well as key outcomes for our community and we look forward to welcoming Mr Pewhairangi as part of the executive team.” Craig says Anaru, who is currently director Māori in the police’s Māori, Pacific and ethnic services, came from senior leadership and broad operational experience, and had wellestablished iwi, community and council relationships in Rotorua. “He has an inclusive, values-based style and is passionate about building thriving and safe communities, which is a key priority area for [the] council. “We look forward to his strategic input into addressing the challenges Rotorua faces and delivering positive outcomes for our community.” In the statement, Anaru says he is “excited” to join the council, having previously enjoyed a good working relationship with it as Rotorua area commander. “I have been impressed by [ the] council’s vision and direction and the collaborative approach to building not just thriving, but resilient communities, and the focus on ensuring effective partnerships with Te Arawa, our local iwi. “I want to be part of the change, the important mahi that the council is doing to future-proof and transform Rotorua, and am excited to serve our people and our communities.” He says Rotorua had been his home for almost 10 years and he looks forward to reconnecting with the community and contributing to the “important kaupapa for the greater good of the rohe”. The role was responsible for the various functions in the council including community safety, open spaces, sport and recreation, facilities, “community regeneration” and facilities including the Sir Howard Morrison Performing Arts Centre, the aquatic centre and museum — all of which have work under way either for earthquake strengthening and or renovation. Anaru, as community wellbeing deputy chief executive, will also be responsible for the library and the establishment of community hubs — a target in the council’s 2021 Long-term Plan. Anaru replaces Jocelyn Mikaere, who was in the role from its inception to September 17 last year. Jocelyn left to take up a role with the Ministry of Education. She was hired as the council operations manager, which was disestablished with the creation of the community wellbeing deputy chief executive role. Anaru became Rotorua’s first Māori police area commander in March 2017, having moved to Rotorua four years earlier. A school teacher for eight years, he worked for the police for 20 years, holding leadership roles. Anaru is of Ngāti Porou, Ngāti Rangiteaorere and Ngāti Tūwharetoa descent. His wife Shelley, is a former police officer who tutors at Toi Ohomai. He has two sons, aged 9 and 11.