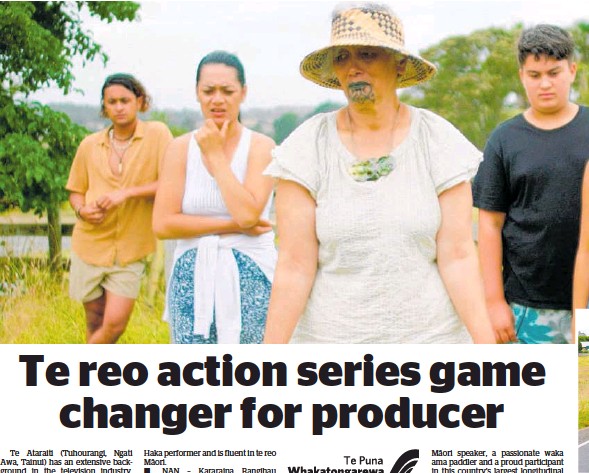 Psst ... Have you seen what’s happening on Māori+, the digital platform of Whakaata Māori. That’s where all six 10-minute episodes of the first 100 per cent reo Māori action scripted children’s drama Te Pāmu Kūmara, (The Kūmara Farm) has its home. The series, funded by Te Māngai Pāho, is centred around Tai (12-yearold Owairea Tawera) and her superhuman whānau who run their local vege shop from their kūmara farm, and must protect their whenua from those who desire it for their own ends. For Kura Productions’ managing director Te Ataraiti Waretini, Te Pāmu Kūmara is a game changer. “This programme wouldn’t even have been possible five years ago,” says Te Ataraiti. “For generations, many have fought hard for tamariki to be raised with te reo Māori yet, when they come home, those tamariki have had only Pākehā dramas to watch. “Te Pāmu Kūmara is a show specifically for our tamariki, something that reflects their Māori values and is in te reo Māori. “Importantly, it shows a changing of the times, we now have more experienced Māori writers, directors, crew and cast in drama who want high quality content for tamariki. On set, Te Ataraiti recalls a particularly poignant moment. “One of the kids was asked, ‘ How is it working on a Māori set for a reo Māori show?’ She answered, ‘It’s easy because it’s my culture and my language.’ “It’s not just normalisation of te reo Māori but the Māori working environment. Our tamariki absolutely deserve fun, magical drama all in te reo Māori, which they can relate to.” Te Ataraiti (Tuhourangi, Ngati Awa, Tainui) has an extensive background in the television industry, having worked both in New Zealand and abroad for well over a decade. She was born and raised in Rotorua and maintains strong ties to her whanau. The cast is: ■ TAI KAHU – Owairea Tawera, 12 (Te Rarawa, Te Whānau-a-apanui) The daughter of actors, Owairea had a small role in New Zealand movie Night’s in the Garden of Spain when she was a baby. She is also a Kapa Haka performer and is fluent in te reo Māori. ■ NAN – Kararaina Rangihau (Tūhoe, Te Arawa) lives inwaikaremoana. She is a dedicated Tūhoe tribeswoman committed to the preservation, protection and restoration of Tūhoe epistemology, and devoted to ensuring that Tūhoetanga continues as a living practice in her community. ■ AMAIA – Rawinia Morehu (Ngāti Hine, Te Rarawa, Ngāpuhi, Ngāti Porou, Tūwharetoa) Amaia is Tai’s best friend. Fluent te reo Māori speaker, Rawinia has several years of presenting experience under her belt. ■ NĪKAU – Kanoa Macfie (Waikato, Ngāti Ranginui, Ngāi te Rangi, Ngāti Kauwhata, Ngāi Tai ki Tāmaki, Ngāti Pāoa) Kanoa Macfie plays Nīkau, Tai’s brother. He is a fluent te reo Māori speaker, a passionate waka ama paddler and a proud participant in this country’s largest longitudinal study, Growing Up in New Zealand. ■ MARAMA – Awhina-rose Ashby Awhina-rose plays Marama, māmā to Tai and Nīkau. She has an extensive acting CV. ■ MIKAERE – Aniwa Whaiapu Koloamatangi (Te Rarawa, Te Aupōuri, Waikato, Tonga) Aniwa plays an older cousin of Amaia. He discovered a love for performing during his time at Western Springs High School.