‘Success isn’t by one but the many’

Gabe Te Moana Member of the New Zealand Order of Merit Gabe Te Moana says his reason for accepting a Queen’s Birthday Honour is to acknowledge those who went before him. “I was surprised [to be offered an honour],” the Tūrangi man says. “The reason I accepted was because of those people who are no longer here and who have moulded me and made me what I am. “To not accept it is to trample on the things that they have done for me.” On Monday, Gabe was made a Member of the New Zealand Order of Merit for his services to Māori and governance. He has contributed to Rereahu, Maniapoto and Tūwharetoa iwi as a kaumātua, chairman, trustee, historian, reo Māori exponent and rangatira of whānau affairs. Gabe, 67, is constantly called upon for assistance and guidance in whakapapa, tikanga, te reo, rongoa, Māori folklore and oral history. He is Te Hape Marae chairman and has been involved with marae developments over the years. He is an adviser and marae chairman on Te Maru o Rereahu Iwi Trust working towards the iwi’s Treaty settlement and postsettlement governance entity and has been on Taringamotu Otamakahi Trust Farm since 1979 as an executive and advisory trustee, and as chairman since 2009. Of Rereahu and Maniapoto descent on his mother’s side and Ngāti Tūwharetoa (Ngāti Hinemihi and Ngāti Hikairo) on his father’s, Gabe (Gabriel Pikiao Edward Te Moana) grew up in the King Country in the shadow of his ancestral mountain Pureora-Okahupeka. Mai Rangitoto ki Tuhua, Gabe connects to all the marae in the Rereahu rohe. He was raised in the era where his elders thought letting go of Māori things would further their young people’s way in the world. “Being part of that generation meant that we weren’t actually taught te reo Māori and all those sort of things. It wasn’t until later in life I realised and a lot more people realised as well that there was a high potential risk that te reo Māori would be lost as a result of that pathway.” So Gabe started to look for ways he could improve his knowledge. He says initially he was only interested in the language, not the wairua, but as he learned more and more, “the journey got deeper and deeper” and as his sister told him, “you can’t have one without the other”. He signed up for distance learning at Waikato University and took every course he could. “I went to night school in Tūrangi, I used to travel to Ohakune and be part of their reo and it gave me an understanding that there were different dialects in te reo and different ways of approaching things as well.” At the same time, Rereahu was being handed back its land by the Government and the iwi began to look for people to serve on the newlyformed trusts. “My parents and the older people thought that it would be a good thing for me to start giving into that space and I’ve been in that space since 1979. “I’ve been on two or three trusts and I’ve stayed on those over the years and also marae chairmanships and marae committees, but the reason I took up this journey was because a lot of our old people were passing away and there was no succession happening around that. One of the motivations for me starting along that pathway was to carry the mantle of what those people meant.” Such was the demand for Gabe’s skills that he had to put a limit on the amount of responsibility he took on, sticking to two or three trusts plus marae committees. He says it was important to have people around him to support him and also to make sure he took enough time for his family. “I had to step back and say ‘you can only give so much of yourself and the more you become relied upon to be a part of these trusts, the less time you have to give to each’.” In his professional life, Gabe spent 44 years working for the Ministry of Works, later Downer. Although he retired last August, he is still runs the Downer Māori Leadership Board, Ngā Kaitiaki O Te Ara Whanake, which ensures Māori are better represented in leadership at all levels and facilitates six Māori leadership programmes. His career started at National Park where he cleared snow from the mountain from the mid-1970s to the mid-1980s before being transferred to Tūrangi where managing snow in winter was a significant part of his role as road manager. Gabe has always had the steadfast support of wife Kathleen, known as Bubs. The couple have a son, six grandchildren and three greatgrandchildren and life revolves around the mokopuna. He says there’s an old Māori saying that success isn’t by one person but by the many who have contributed to that person’s journey and that was what he thought of when he agreed to accept the Queen’s Birthday honour. “I accept it only for that reason alone, because so many people have been there within that world with me through the years.” 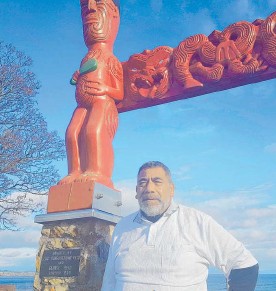