Rugby newbie is up with the play

In my six months of working as a journalist, I have spoken to government ministers, I went on a hot air balloon flight, I visited farms, looked at our new recycling facility, I even met the Prime Minister — but I have never been to a rugby game. So, when my boss told me to cover the All Blacks vs Fiji game in Hamilton last Saturday (which would be “a significant event for the city”), I thought “challenge accepted”. I don’t know much about sports, to be honest. I have been to a soccer game twice back in Germany (to a “Federal League” game), but that’s about it. Armed with my old-school notepad and a pen, I made my way to the media room at the FMG stadium. Samoa had already played Tonga in the afternoon and the room smelled like coffee, chewing gum and Haribo Starmix lollies. I found my place between seven very concentrated looking sports journalists with laptops. The room was quiet, I only heard the typing of my colleagues’ keyboards and, through the open panorama window, I heard the crowd of 20,135 people. The people in the stadium were really just one big crowd, no clear sides visible. Fans of the All Blacks and Flying Fijians fans sat together. From my soccer experience, I remember fans of the two opposing teams would sit on opposite sides creating a feeling of rivalry. When everybody in the stadium, even us in the media room, stood up for both national anthems, my fear that I was an intruder slowly disappeared. The national anthem was followed by a haka from the ABS and the Fijians’ traditional cibi. Despite having seen a haka performed before, this one was different. The whole stadium was quiet and although I didn’t understand the words, the performance gave me goosebumps. Living up to the German stereotype that we are always punctual, I noticed that you Kiwis are usually more relaxed with the meaning of being on time. But not when it comes to rugby. With surprise I heard the stadium loudly counting down from 10 and at 7.05 sharp, was kick off. I didn’t understand a lot of what was going on the field, but I could rely on the crowd to let me know when something important happened. I heard the crowd getting nervously excited when a player of either team gets close to the end line with the ball. Cries of “pass!” could be heard here and there sometimes and “ouuuuu” sounds went through the whole stadium when any player got tackled or penalties were given. One thing that positively surprised me (because it was so different at the soccer game) was that when either team scored, everyone celebrated. No booing or whistling from fans of the opposing team, just one happy crowd. Even more, I had the impression that whenever Fiji scored, the clapping, screaming and whistling was even louder than whenever the All Blacks did. Looking at the end score, 60-13 for the All Blacks, I think Fiji needed the support from the crowd more. All of a sudden, after about 40 minutes into the game, an incredibly loud siren noise filled the stadium. I got a little fright, thinking of a fire alarm and slowly started packing my stuff to make my way out. When no one else seemed bothered, I realised it was just the signal for halftime. As soon as the game ended after 80 minutes, indicated by another fire alarm siren, the stadium emptied rapidly. However, those who stayed witnessed a special moment between the All Blacks and Flying Fijians. The two teams stood in a circle, arms over each other’s shoulders and they sang. I later found out that it is a Fijian song called Oqo na noqu masu (This is our prayer) and the Fiji team often sings it after a game. That the All Blacks joined in was a special occasion. If I had to describe my experience of the rugby game in one word, I would say unifying. It was not two teams fighting for the win, one side against the other, it felt like it was about a good game and a good time. 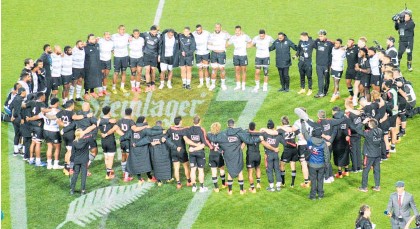