University of Waikato ecologist Professor Bruce Clarkson was awarded the Hamilton Kirikiriroa Medal, one of the city’s highest accolades. The medal recognises his research which has guided many biodiversity and ecological restoration projects, including Waiwhakareke Natural Heritage Park and the Hamilton gully restoration programme. Since 2016 Clarkson has led a Ministry of Business, Innovation and Employment (MBIE) funded research programme. Hamilton mayor Paula Southgate, who presented the medal, says: “Bruce is a huge treasure to council — and a taonga for our city — because we can rely on him for all the years of work he has done and the expertise he has. “New Zealand’s biodiversity is under great threat. If it wasn’t for people like Bruce, we’d be in a worse situation.” The Hamilton Kirikiriroa Medal was also awarded to Clarkson’s wife, Dr Bev Clarkson, an internationally renowned expert in wetland research and restoration at Manaaki Whenua — Landcare Research. Clarkson says he and Bev, who is also a Waikato University alumnus, were “honoured” to receive their medals. “It shows that our research is valued and that the council understands the value of investment in nature.” Southgate recalls meeting Professor Clarkson early in her political career, when he laid out his vision for Waiwhakareke park near Hamilton Zoo, on the northwest edge of Hamilton. Since 2004, the 65.5ha council-owned site has been transformed from farm paddocks into an internationally acclaimed regenerating native forest, wetland and a lake ecosystem rich in biodiversity. Community groups and schools have rallied to plant native trees and develop the area. Clarkson his team have been involved in this project for more than 16 years. “People are amazed at what we’ve done at Waiwhakareke,” says Clarkson. “Internationally, they can’t believe it. To get valuable land in the city, and turn it back into native ecosystems, is not a common thing.” Setting the standard Clarkson’s multidisciplinary Mbie-funded project called People, Cities and Nature, has helped guide many councils and communities around New Zealand. For years, he has been fuelled by a passion to bring nature back into our cities, including in Hamilton. It was his vision and research that helped to launch Waiwhakareke in 2004, a community project that has gathered hundreds of advocates along the way, from councillors to school children. “It’s not just for the sake of biodiversity, it’s a place of recreation and a place where the community is working collectively, building social cohesion. It has multiple benefits,” says Clarkson. “Bruce’s research has created a massive ripple effect in the community,” says Southgate. “He shares his knowledge in such a relaxed way which means it becomes accessible to everyone.” His research has also supported urban gully restoration. Hamilton has four major gully systems, winding through some 750ha of its suburban backyards. “These are really important because they are the lungs of our city,” says Southgate. “They rejuvenate the air we breathe, they filter our run-off water, they provide a home for native birds and other critters, and they are absolutely fundamental to protecting our biodiversity for the future.” Greening urban environments also has benefits for human health and wellbeing, which is the focus of Clarkson’s new MBIE Endeavour Fund research proposal, Restoring Urban Nature. “As our cities get bigger and our buildings get higher, green space becomes actually pivotal in my view,” says Southgate. “And Bruce has always known that — the healing power of being in green space.” Southgate recalls visiting the eco-sanctuary with naturalist Ruud Kleinpaste, “New Zealand’s bug man”. “He said Waiwhakareke was the best example of urban restoration that he has seen in the whole country. What he liked about it was that it was natural and uncontrived.” Its value as an educational space for local school children — whether planting for Arbor Day or learning about pest management and “the little critters and the fish that live there” is “priceless”, she adds. “But also, it’s a beautiful, serene place. The natural environment is important — to have somewhere where you can go to connect back to life through nature.” Waiwhakareke was a vision Hamilton City Council supported along with Waikato Regional Council, Waikato University, Wintec and iwi, community and biodiversity organisations, Southgate says. Every year on Arbor Day, and on countless other days, the people gather at Waiwhakareke to plant trees. In the beginning, planting focused on the margins of Horseshoe Lake and progressively expanding outwards. Waiwhakareke is now an outdoor classroom and a place where ma¯tauranga Ma¯ori (traditional Ma¯ori knowledge) is also celebrated. It has an appeal as a visitor destination, located next to Hamilton Zoo. A shared entry is being built to showcase the conservation precinct. “On one side of the road you can go and see world ecosystems like the South African savannah, with giraffes and other animals that belong in South Africa, and then you come to the other side of the road and see NZ as it was before European settlement,” says Clarkson. His research on indigenous biodiversity has been incorporated into Hamilton City Council’s 2021-2031 Longterm Plan. Some $29 million is earmarked for improving the city’s extensive gully network and the council aims to increase urban indigenous vegetation cover from 2 to 10 per cent. 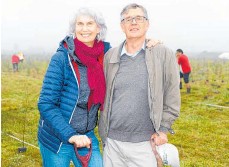 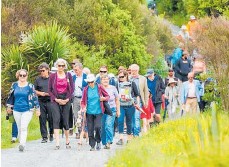 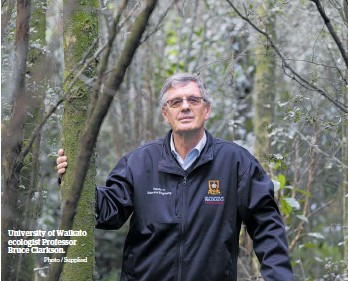