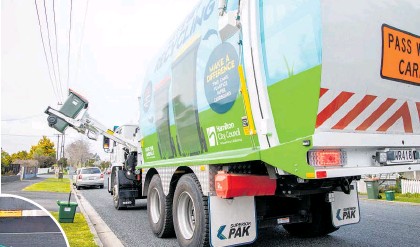 More than half of Hamilton has ditched the habit of recycling their food scraps for compost, meaning tonnes of extra food waste is going straight to landfill each month. The city council suspects it may be a hangover from Covid-19 level 4 lockdown when food waste was not able to be collected for the last 13 days of August. Collections returned to normal under level 3 but since August, only 47 per cent of Hamiltonians have been putting their food waste bins out for collection. Hamilton City Council rubbish and recycling transitional manager Trent Fowles said any food waste sent to landfill comes at a cost to the environment and is urging households to do better. Fowles said he knows there are challenges to using the food waste bin during summer, such as preventing smells and deterring flies and maggots. “You can prevent these issues by using the bins for organics only and storing your perishables, such as meat, eggs and dairy products wrapped in newspaper in the freezer until collection day. Also look for cool, shady places to keep the bin, ensure the lid is always closed and locked with the handle in the upright position and thoroughly wash it at least once a month. “New Zealand sends 1.8 billion tonnes of food waste to landfill every year — where it creates methane, a toxic greenhouse gas,” he said. He says by using the kerbside food waste bin, Hamiltonians saved 50 extra tonnes of food waste (or 5 million apples) from landfill in September compared with October. “In Hamilton there’s no reason for us to send food waste to landfill. The only time we can’t collect it is during a level 4 lockdown, which we haven’t been in since August last year.” Before last year’s national lockdown came in halfway through August, Hamiltonians diverted 255 tonnes of food through the kerbside food scraps bin, the lowest collection rate since the new service launched. Throughout 2021, Hamiltonians diverted an average of 500 tonnes of food waste a month. End-of-year parties, Christmas and New Year dinners, plus additional packaging and wrapping contributed to December being a month with high levels of waste sent to landfill. In December 2020, Hamiltonians sent 1109 tonnes of waste to landfill (the weight of 150 elephants). This dropped slightly to 1097 tonnes in January last year, but had increased in November to 1269 tonnes. “That’s a lot of waste. We know we can do better and the food waste bins provide an easy solution for most households to cut back on what is sent to landfill,” Fowles said. For more information on the kerbside service, including an online recycling sorting tool, see fightthelandfill.co.nz