Tale as old as time to be told at Riverlea 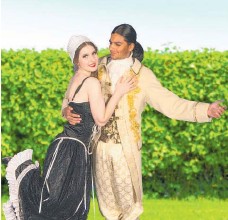 The Hamilton Musical Theatre is ready to again enchant the town during the summer holidays with the “Tale as old as time”, Beauty and the Beast Jr. The musical is set to stage from Tuesday and is inspired by the 1991 Disney movie classic. It follows the story of Belle who embarks on a journey to save her father from a creature, the Beast, that has locked him in his dungeon. To save him, Belle offers to take her father’s place and learns that the Beast is an enchanted prince who has been cursed. Director Toni Garson is in charge of the annual Disney Junior musical for the fourth time. “Although I also love directing adult productions, there’s something special about seeing our youth develop and grow in the Disney Jr shows. “And the stories are fantastic: While the children in the audience love them, so do the adults. It’s that Disney magic of telling stories that seem to transcend time and draw us all in,” she says. The cast of 33 students from schools across Hamilton and its surrounding towns are aged 11 to 18 and had to “pivot” to get this year’s musical staged. The latest lockdown delayed the scheduled start of rehearsals. Garson says: “We started with our first rehearsal on Zoom and then our choreographer Tess Benseman filmed the dance routines on her driveway so the cast could practise at home.” Once they could, the team moved to rehearse in small groups, physically distanced and outside in the Riverlea Theatre carpark, to keep everyone safe and comply with the alert level requirements. Production manager Kāren Langley says: “The delay has put pressure on the production team, who have had to juggle set building, costume making and so on, over the Christmas break, with the various end-of-year work and home pressures. “But they are a fantastic team, and we love supporting our youth performers.” For Beauty and the Beast Jr, Garson and Benseman will be joined by musical director Jonty Climo for the first time. Climo has previously worked with Tauranga Musical Theatre. Hamilton Musical Theatre has a history of regular opportunities for youth performers and technicians to be involved in well-loved musicals designed specifically for young audiences. Several of their youth performers go on to be cast in their other musicals and productions for other theatre groups or have chosen to study performance professionally at tertiary institutions.