This Friday, November 26 at 5pm, followers of the Baha’i Faith in Whanganui and friends are gathering at Te Aroha Marae in Kai Iwi, to commemorate 100 years since the passing of ‘Abdu’l-Baha´ who was the eldest son and dedicated servant of his Father Baha’u’llah, the Prophet-Founder of the Baha’i Faith. At 7.30pm there will be viewing of a new film about ‘Abdu’l-Baha´ especially made for the occasion, which the public are more than welcome to attend. ‘Abdu’l-Baha´ was born in 1844, a year known to history as “The Great Disappointment”, on the night of May 23. The very same night, a young merchant from Shiraz was announcing to His first believer, that he was The Ba´b — The Gate of God. Abdu’lBaha´ is known to Baha´’´ıs all over the world as the Perfect Exemplar and the Mystery of God, a living embodiment of Baha´’u’lla´h’s teachings who was a dedicated follower of The Ba´b. As a child, ‘Abdu’l-Baha´ witnessed the incarceration of His Father, Baha´’u’lla´h, and He was exiled with His family from their native Iran to Baghdad, and then to the Ottoman prison city of Akka. During Baha´’u’lla´h’s imprisonment, ‘Abdu’lBaha´ cared for His family and followers, helped to protect His Father, and looked after the poor and needy. Baha´’u’lla´h directed His followers to turn to ‘Abdu’l-Baha´ after His passing. In 1908, ‘Abdu’l-Baha´’s period of imprisonment and exile was ended by events associated with the Young Turk Revolution. He undertook an historic journey to Egypt, Europe, and North America. His public talks conveyed the essential message of the Baha´’´ı Faith and related it to pressing needs of humanity, emphasising the cause of peace, the equality of women and men, racial justice, social reform, and the role of religion in society. When ‘Abdu’l-Baha´ passed away at the age of 77 on November 28, 1921, in the Holy Land, His funeral was attended by 10,000 mourners of numerous religious backgrounds. In spontaneous tributes to an admired personality, He was eulogised as One who led humanity to the “Way of Truth,” as a “pillar of peace” and the embodiment of “glory and greatness.” 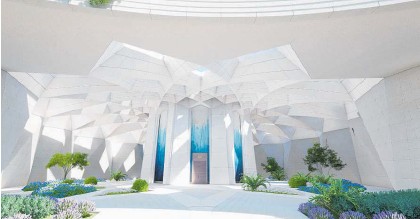